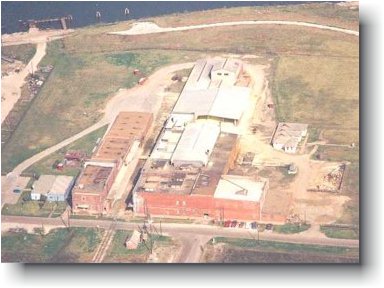 The S.F. Sulfur Corporation sulfur plant (formerly Stauffer Chemical Company ) is located on a thirteen acre site in Freeport, Texas. Built by Hans Stauffer, this facility has been producing various types of processed sulfur since 1916. Mr. Stauffer lost his first plant in San Francisco to an earthquake in the late 1800's. The Freeport site was designed to withstand such a disaster. To date, over one million tons of processed sulfur has been produced at this plant. The facility includes over 40,000 square feet of warehousing space.

Autos: From Houston, Texas, take State Hwy 288 South to Freeport, Texas. Hwy 288 South turns into Brazosport Blvd. when you get near Freeport. Turn left at the High School onto Second Street. Proceed through residential area. The S.F. Sulfur Corporation plant is on the left at 608 East Second Street.